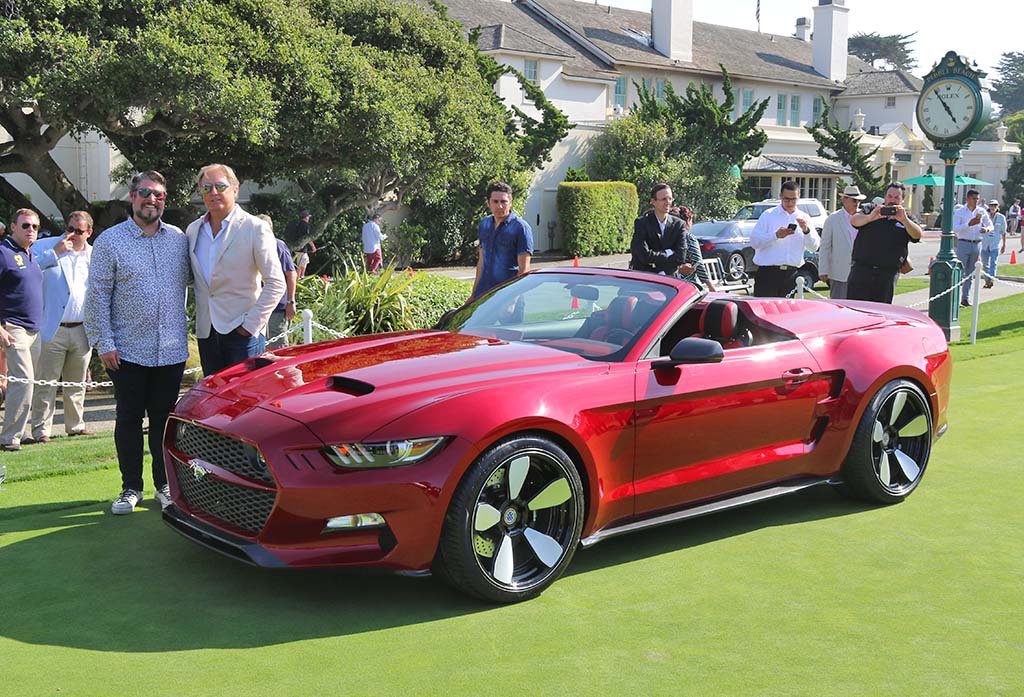 Danish designer and automotive entrepreneur Henrik Fisker is back with another low-volume custom car project, this one aimed at upping both the performance and styling of the latest Ford Mustang convertible.

It follows the launch of the Galpin-Fisker Rocket last year, which was based on the then-new 50th anniversary Ford Mustang. Both models undergo a number of design tweaks, but for many, the real selling point will be out of initial view, a supercharged 725-horsepower V-8.

“When I worked on the Rocket Speedster project with Beau, the creativity sparks were constantly in the air,” said Fisker. “When I was designing the speedster cover, I gave it extreme sculpture and dynamic lines that flow with the muscular body of the Rocket and created a new interior graphic to go with it. I’m very excited to unveil the Rocket Speedster at the Pebble Beach concept lawn with Beau.”

Both versions of the Rocket were inspired by some of the distinctive customized Mustangs of the 1960s and ‘70s, according to Fisker, but this is no retromobile. The body of the new Fisker Rocket Speedster Concept is made of ultra-light carbon fiber, for one thing, with visible stripes stretching from the hexagonal grille through the speedster cover, with its exposed air outlets. An integrated mesh behind the driver and front passenger is meant to reduce air turbulence.

The handcrafted bodywork, put together by GFMI Metalcrafters, in Fountain Valley, California, puts a premium on aerodynamics. Among the elements meant to improve downforce and cooling are twin air scoops mounted on the rear fenders, ahead of the back wheels. The Rocket Speedster’s 21-inch metallic red alloy wheels barely conceal 15-inch Brembo brakes.

“This Speedster Concept has added another layer of style to the car without losing an ounce of the incredible beauty of the coupe,” said Boeckmann.

Meanwhile, a variety of modifications to the stock Ford V-8, including a supercharger and Bassani cat-back exhaust, help bump power to 725-hp. That’s up from the 435 ponies produced by the 2015 Ford Mustang GT – and well above the 500-plus horsepower from the production version of Ford’s own Mustang GT350.

That puts it slightly ahead of the 707-horsepower Hellcat models offered by Dodge based on that maker’s Challenger coupe and Charger sedan.

While officially named a “concept,” the Rocket Speedster isn’t meant to be a one-off. Like the Rocket Coupe, Fisker promises to put it into production in the near future. It will be offered through the Galpin store – the world’s largest Ford outlet – and several other partner dealerships.

A sketch of the Galpin-Fisker Rocket Speedster released before the official Pebble Beach debut.

Firm pricing information has yet been released. But the Fisker Rocket Coupe in 725-hp trim is starting at $125,000, and the Speedster is expected to go for several $1,000 more, Boeckmann estimates.

The Danish designer is perhaps most widely known for the eponymous car company that brought to market the Fisker Karma plug-in hybrid. It went bankrupt several years ago and was sold to a Chinese automaker that plans to revive the brand later this year. But Henrik Fisker proved his design chops during a long stint with Aston Martin, styling several iconic products, including the DB9.