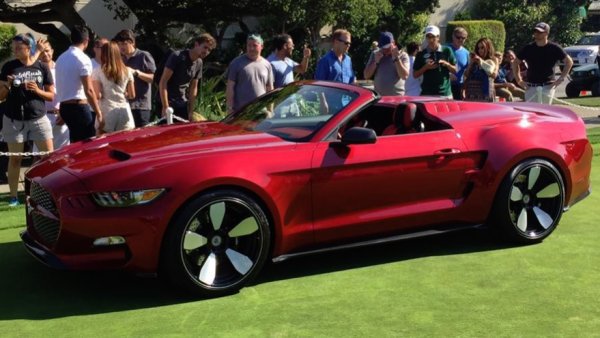 Galpin Ford and Henrik Fisker have joined forces in order to create the Rocket Speedster at the 2015 Pebble Beach Concours d’Elegance. The model in question has originally been unveiled, as a coupe, back in late 2014, at the Los Angeles Auto Show, and it is now being offered in a roadster variant, with a deep metallic red finish covering its body. If you haven’t figured it out already, the Galpin Auto Sports Fisker Rocket Speedster has been based on the Ford Mustang Convertible GT.

“When I worked on the Rocket Speedster project with Beau, the creativity sparks were constantly in the air,” said Fisker. “When I was designing the speedster cover, I gave it extreme sculpture and dynamic lines that flows with the muscular body of the Rocket and created a new interior graphic to go with it. I’m very excited to unveil the Rocket Speedster at the Pebble Beach concept lawn with Beau.”

The new Galpin Auto Sports Fisker Rocket Speedster is coming with carbon fiber made custom body parts, with the tonneau cover starting from the front seats headrests and covering the rear seats, large 21-inch bespoke alloy wheels, an extra air scoop mounted on the rear fenders, 15-inch Brembo Gran Turismo high-performance brakes and so on. Under its hood we can find the 5.0 liter V8 engine, supercharged, producing 725 HP (540 kW). Galpin Ford and Henrik Fisker are talking about this model as a concept, but this will be offered in a production version too. However, the number will be very limited and pricing is not known so far.