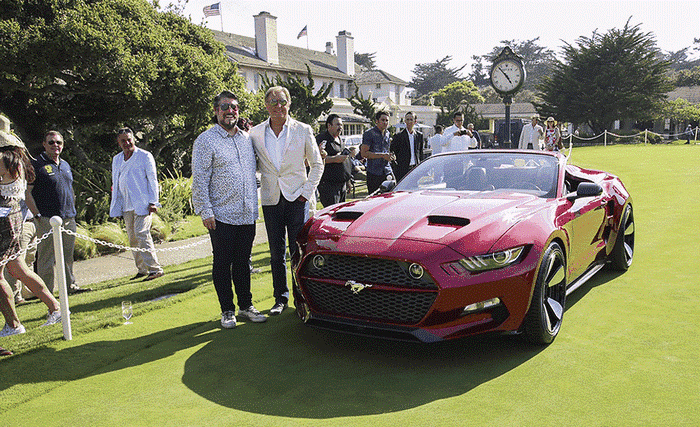 The Galpin Rocket Speedster Concept is envisioned as a limited-production convertible two-seater version of the Rocket coupe that Galpin and Fisker unveiled at the Los Angeles auto show last November.

Unwrapping the convertible during Pebble Beach’s weekend festival of high-end brands and rare collectibles, Fisker said the Speedster uses a light carbon-fiber body that channels air under the hood through two sculpted intakes to cool its powerful engine.

The Speedster would use a 725-hp Ford V-8 package, Fisker said, speaking with Beau Boeckmann, president of Galpin Auto Sports.

The drop-top reveals a more pronounced rear deck in place of the usual Mustang back seats.

Fisker and Boeckmann did not estimate when the Speedster might be offered for sale, or what its price would be.

The two also presented the production version of the coupe this weekend, and that model sells for about $109,000 — or $120,000 with a supercharged engine option.

The convertible was constructed by GFMI Metalcrafters, Inc. in Fountain Valley, Calif.

Fisker, a Danish designer known for his flair on Aston Martin and BMW designs, was also the business force behind the unsuccessful start-up Fisker Motors in 2008. Fisker had hoped to convert a closed General Motors factory in Wilmington, Del., to mass-produce a family of luxury plug-in hybrids that would rival Tesla.

That venture filed for bankruptcy in 2013, after building about 2,400 Fisker Karmas. Its assets were acquired in 2014 by the Chinese parts giant, Wanxiang Group, which renamed the company The New Fisker.

The company’s website, thenewfisker.com, recently notified Karma owners that they will receive a $2,000 credit for parts and labor.

Earlier this year, Aston Martin sued Fisker and Galpin in U.S. District Court in California after the British carmaker claimed Fisker’s design for another proposed Galpin project — the Thunderbolt — looked too much like an Aston Martin design. Fisker dropped that plan and settled the suit in April.