WATCH: How Ford will park Mustang on top of Empire State Building for second time 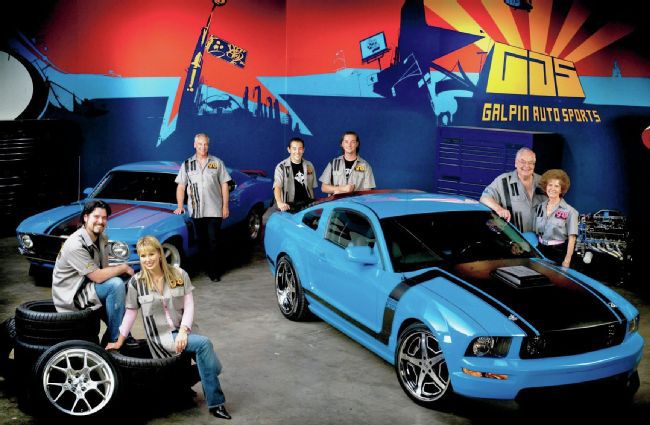 Ford has been building Mustangs for 50 years, which means 60-year-old Galpin Ford has been selling them for just as long

Herbert F. "Bert" Boeckmann has been selling cars most of his working life. He joined already established Galpin Ford, in Southern California, in 1953 as a line salesman, becoming general manager in 1957 and eventually purchasing the company in 1964, just about the time Ford was coming out with the ’65 Mustang.

Nearing the occasion of the Mustang’s 50th anniversary, we sat down to chat with Boeckmann and his son Beau, a Galpin Ford VP and president of the company’s Galpin Auto Sports custom shop and Premier Collection. Countless Crown Vics, Thunderbirds, Edsels, F-150s, Pintos, and Mavericks have trundled through the Galpin showrooms, and the elder Boeckmann is largely responsible for inventing and popularizing the notion of pre-sale personalization and customization at the dealer level. In the 1960s, they called it "Galpinizing," including custom paint jobs and bodywork along with some of the first van conversions. This concept lives today in a much more developed form with the Galpin Auto Sports shop that can build nearly anything you can dream up. For a time, the GAS shop was home base to television’s popular "Pimp My Ride" series.

Galpin relocated to much larger quarters in 1966, since taking over much of Roscoe Boulevard near the 405 Freeway in the San Fernando Valley, and now sells Ford, Lincoln, Volvo, Aston Martin, Jaguar, Lotus, VW, Subaru, and Honda brands from a fleet of dealership locations. Galpin has always been extremely "customer-involved," launching and supporting many car clubs over the years, hosting massive open houses, sponsoring and often building race cars, producing a much-in-demand garage calendar that’s given away free of charge, and even publishing its own magazine for some years.

We asked Bert about his earliest impressions of the ’65 Mustang when it first arrived at his dealership. "I loved the look right away and knew we had something special on our hands by the reactions of everyone who saw it," Bert said. "It appealed to such a wide variety of people; young people, older people, kids. Not only men but women wanted one too. I was sure Ford had a winner. People waited in line just to see it on the showroom floor."

It wasn’t long before Bert met and became friends with Carroll Shelby. Galpin, along with Tasca Ford, became America’s first Shelby dealers. Boeckmann ultimately built a specially equipped off-road truck for Shelby, which Carroll, ever the adventurer, intended to use in his hunt for the Sasquatch "big foot."