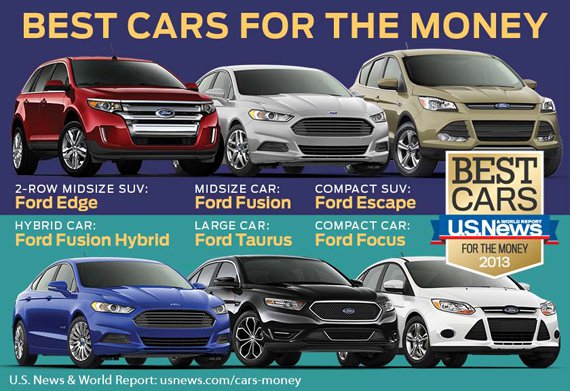 For the second straight year, Ford dominates the U.S. News & World Report 2013 Best Cars for the Money rankings, with six Ford vehicles offering consumers the most bang for their buck. The 2013 Focus, Fusion, Fusion Hybrid, Taurus, Escape and Edge captured awards based on their outstanding value and critical acclaim. This marks the fourth year in a row Taurus reigns in the large car category, while for two straight years Edge is best midsize SUV, Fusion is the midsize champ and Fusion Hybrid is the best hybrid vehicle. U.S. News & World Report determines the winner in each of 21 categories based on vehicle safety and reliability attributes as well as expert opinion.