Son of a Dealer Thinks His Dad’s the Greatest 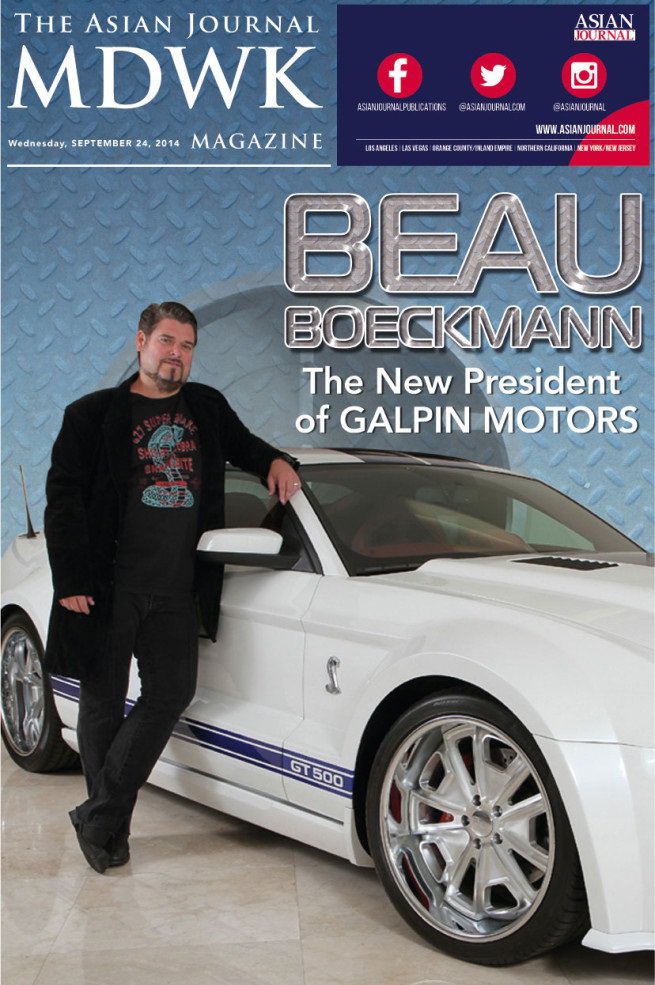 Beau Boeckmann: Driven by a passion for cars

As someone who was born and raised in the automotive industry, Beau Boeckmann was surely destined to become one of its driving forces.

This past July, Beau was named president and chief operating officer for Galpin Motors Inc., after previously heading Galpin Auto Sports (GAS), the company’s division that specializes in customizing cars.

Being at the helm of one of the country’s largest dealership in terms of volume sales, Beau is expected to oversee the daily operations of Galpin Ford, as well as the 10 other dealerships under the Galpin group. Beau’s love story with cars dates back to his childhood days, when his father brought home a white 1957 Thunderbird with red interiors. “I just fell in love with that car,” Beau admitted during a telephone interview with Asian Journal.

The ’57 Thunderbird was the first car that captured Beau’s heart. But it was his grandmother’s 1965 Mercedes 220 SC that captured his imagination. A four-door wing-tipped Mercedes masterpiece, Beau’s grandmother used to drive the car every summer down to California, all the way from Arkansas. “It was my favorite color: green on green on green on green,” Beau recalled, “When she passed away, that’s what she willed me.” It was Beau’s first car ever, and his first possession.

It was also the first car he ever customized. When he was 15 and a half and after receiving good grades, Beau earned his keys to the car, and was able to earn enough to customize and restore the 220 SC. He made it black with a leopard’s skin interior. To this day, that Mercedes 220 SC is still Beau’s favorite car, and the last possession that he would ever sell. Since 1985, Beau has carried his love for cars all throughout these years. One could say that this immense adoration of automobiles has been a big factor in his ultimate decision to join the family business. Beau’s father, Bert, started off as a salesman at Galpin in 1953 and worked his way up to general manager and vice president of Galpin Ford.

By 1968, Bert bought Frank Galpin’s dealership and custom car shop, making a name for himself in the auto industry. However, Beau still considers himself fortunate that his father did not put pressure on him into going into the car business. Instead, Bert allowed Brad – Beau’s older brother, who retired this year from his vice president position – and Beau to pursue whatever made them happy.

As it turned out, it was working on cars that made Beau feel like he was in his element and he never felt forced to work for the family business. You dream it, we build it Galpin Auto Sports (GAS) was the brainchild of Frank Galpin and Bert. It was all focused around Bert’s idea to tap into the customer’s wildest dreams and deliver cars that were not on the dealership floor. Beau, who described Bert as a people-person, said that his father wanted to offer the customers unusual vehicles that no other dealers had, that they couldn’t find anywhere else in the public.

Bert envisioned an in-house Galpin ‘toy store’ where car junkies — like the Boeckmanns and their team of engineers, as well as their thousands of customers — can build practically anything out of a car. “As we say, if you can dream it, we can build it,” Beau said. And as someone who started customizing cars at age 15, Beau was a natural fit to lead GAS. “That’s where I get to play, and frankly, it’s the greatest thing in the world,” Beau said. These days, when one mentions Galpin Auto Sports to any custom car enthusiast, the next thing that comes to mind is Pimp My Ride, the hit MTV reality show that was famous for featuring insane car modification and restoration projects. For the 5th and 6th season of Pimp My Ride, GAS was the featured car shop in the show — the shop where the magic happened. According to Beau, Pimp My Ride inevitably helped GAS gain worldwide recognition. While Galpin as already big in California, its fame skyrocketed with Pimp My Ride viewership reaching in the millions across the world. “We really [helped the show] focus more on what car guys might actually want to do with their cars,” Beau said. In previous seasons of Pimp My Ride, when the show was based at a different car shop, the show’s engineers focused mainly on performance upgrades. When Beau and the GAS team stepped in, they steered the show towards doing more engine swaps, restorations, modifications, and basically all kinds of work that helped the cars “look kinda crazy and cool, but also drive equally crazy and cool” at the same time.

Beau also indicated that Galpin Motors and GAS are still open for pursuing another venture similar to Pimp My Ride. Self-competition As the new president for Galpin, Beau recognizes the fact that there will always be improvements that need to be made. Like his old man once said, ‘You will start failing the moment you think that you have arrived.’ “The moment that you feel that ‘you have arrived’ is the moment that you’ve started failing because you no longer look at what’s next on how we can improve because we can always improve,” Beau said. And being in the auto industry, Beau knows that first, there will always be a pressure to outperform the competition, and to outperform themselves. “I think that’s the greatest kind of competition, when you’re trying to beat your own self at your own game,” Beau said. It seems beating Galpin Motors, the world’s top Ford dealer is no simple task. And for Beau, he already has his work cut out for him.

A family enterprise At the end of the day, Galpin Motors and GAS are part of the family business. As with all businesses there will be days when tough issues need to be threshed out with employees and management. And with family members being part of the company, the working dynamic may become complicated.

That doesn’t seem to be the case for Beau and his relatives who are part of the Galpin family. Beau has developed an even closer bond with his brother Brad – a relationship that has allowed them to lead the company in perfect synergy, prior to Brad’s retirement. “We have a great business and a great family in this organization.

But we have a very close family as well,” Beau said, “Of course we’re still family, [but that] doesn’t mean we never argue or fight. But the great thing is, no matter what, we always sit down and talk to one another and discuss things.” Beau said that they never let their predisposition as brothers, sisters, uncles and nephews, get in the way of pursuing success for Galpin Motors.

According to a report in the San Fernando Valley Business Journal, Beau confirmed that there are nine other family members involved in the business, including his father who remains active as chairman and chief executive.

Now, a new generation of the Boeckmann family is preparing to lead the way at Galpin, with Brad’s son, Brandon, taking over GAS, now that Beau moved up to a higher post. Beau is “proud” of his nephew and describes him as a driven leader who loves cars as almost as much as he does. At the heart of it all, it is this closeness to one another that has kept the Boeckmann family as successful as they have been in running Galpin Motors. “I guess nothing’s perfect, but it’s really darn good,” Beau describes it.

As far as success goes, Beau also has his own barometer for measuring the gains he will have made by the end of his term as president. “After years of being in this business, if I can pass on to my children what my father, my parents have passed on to me in the same type of way, if my family is as close [to each other] when I get old as my family is today, and our business family [by the end of my term] is as close as our business family is today, then I will call that as a success,” Beau said. – See more at: http://asianjournal.com/aj-magazines/beau-boeckmann-driven-by-a-passion-for-cars/#sthash.OHqZeNun.dpuf