Beau Boeckmann: Driven by a passion for cars

Car and Driver – The Horseless Carriage 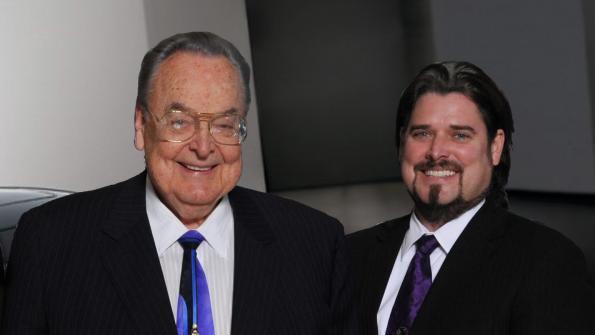 Son of a Dealer Thinks His Dad’s the Greatest

He’s the dealer principal of Galpin Motors in North Hills, and the Galpin Premier Collection in Van Nuys, CA. He’s been in the business for 61 years.

Boeckmann, 84, remains at the helm of the 1,200-employee enterprise, working six days a week, Monday through Friday at the store and on Saturday from home.

He works alongside family members including his sons, brother, grandsons and wife Jane, who serves as treasurer and handles many events and functions required of the multiline dealerships, including charity functions.

These days, the couple’s youngest son, Beau, is taking a larger role in running the dealerships. He’s been around the business his entire life.

A graduate of the University of Southern California, the younger Boeckmann (pronounced Bockman) in the 1980s joined the family business and went on to learn all aspects of it, including service, sales, finance and rentals.

He currently serves as president of Galpin Motors and the Galpin Premier Collection, as well as Galpin Auto Sports, an in-house full-service customizing center.

Beau Boeckmann is the first to point out that the family-focused business is not easily defined by roles and responsibilities. “You do what needs to be done.”

He describes his father as “the most honest and hardest working man” he’s ever known.

His father exhibits three essential traits as a salesperson, manager and owner: “honesty, integrity and sincerely caring about people,” the son says.

Jane Boeckmann says of her husband: “He’s the ultimate fair guy. It’s his code of honor.”

The Galpin group has won more than 3,000 awards and commendations, repeatedly for top sales and customer satisfaction. Many of the accolades are displayed throughout the showrooms.

“More than 85% of our business is repeat, referral and reputation, and that’s been a constant for years,” says Brian Allan, general manager of the Galpin Premier Collection.

He describes the working atmosphere at Boeckmann stores. “The common thread here is a family-owned atmosphere that focuses on the customer.”

Of the elder Boeckmann he says: He has incredible loyalty to employees.”

For 24 straight years, Galpin Ford has held the title of the No.1 volume Ford dealer in the world. Galpin Mazda has been the No.1 volume Mazda dealership in the Western U.S.Galpin Jaguar led U.S. Jaguar deliveries in 2012.

In written form, the values date to when Galpin’s portfolio included the now-defunctGeneral Motors Saturn brand.

“Saturn’s core values lined up with what Dad was preaching about exceeding customer expectations, continuous improvement and caring about customers,” Beau Boeckmann says.

Bert Boeckmann calls Beau “the real car guy” and himself “the people guy.” Beau confesses to a love of customizing vehicles. “It’s in our DNA,” he says. “It’s one of my passions.”

The elder Boeckmann is credited with inventing and popularizing the concept of personalizing and customizing vehicles at the dealer level. He became known as a customizing pioneer, having started the conversion van industry, the 4×4 craze and many automotive firsts that debuted in California.

“Galpinizing,” as it’s called, traces back to 1952 when a Galpin-customized ’52 Ford convertible was featured on the magazine cover of the June, 1953 edition of Motor Trend.

Galpinizing encompassed all customizing areas, including custom paint jobs and bodywork, interiors and van conversions. The concept is central to Galpin Auto Sports that turns out customized vehicles. Customers include auto enthusiasts, celebrities, Ford and the U.S. Air Force.

The facility was part of MTV’s “Pimp My Ride” series. The last 30 episodes were filmed at Galpin, and had viewers in 140 countries, Beau Boeckmann says.

Galpin also has produced many vehicles for the entertainment industry such as “Red Mist” for the movie KICK ASS, “Zombie Killers” for The Walking Dead and a ’08 Ford Mustang called the GT500KR for the TV hit Knight Rider.

Beau Boeckmann is receptive to the possibility of Galpin expanding its dealership portfolio, but to an extent. “We’re always open to new opportunities, but we’re really not going too far outside our (California) markets.”

Another thing that won’t change is Galpin’s close relationship with automakers.

Bert Boeckmann has prized his relationships with Ford since he joined Galpin Ford as a salesman in 1953, and assuming ownership by 1968. Beau carries that on by serving on a Ford committee consisting of select dealers who give internal reviews of vehicles.

Bert Boeckmann fondly recalls a big Ford dealer meeting in Detroit in 2007, when Alan Mulally, Ford CEO at the time, told his executive and marketing teams assembled at Ford Field in Detroit, home of the Detroit Lions, to stand and “tell dealers you love them.”

The first attempt was pretty quiet. Mulally urged them to say it like they meant it. After the third try it came out as a roar: “We love you dealers!”

It was memorable. “I don’t think anyone knew then what a key moment that would be for culture change here,” says Ford spokeswoman Karen Hampton. “It comes up often when dealers and employees talk about our relationship today with our dealers.”

Of Mulally, who retired from Ford in July, Bert Boeckmann says: “I love that guy.”

Another first:  The Horseless Carriage, the first full-menu restaurant at a dealership. It started in 1966 and still serves meals.

Favorite ride: Full-size Lincoln Town Car. Since Ford is discontinuing it, “I just may have Beau build me another one,” says Bert. Also the ’59 Ford Skyliner retractable hardtop.