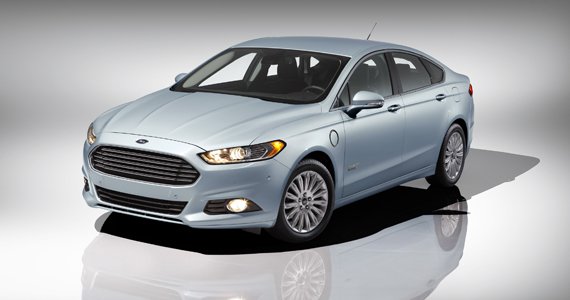 DEARBORN, Mich., Dec. 28, 2012 – The 2013 Ford Fusion – recently voted Green Car of the Year – just got greener as the U.S. Environmental Protection Agency certified the new Fusion Energi plug-in hybrid at up to 108 MPGe, making it America’s most fuel-efficient sedan.

Fusion Energi is the Ford brand’s fifth electrified vehicle to launch in the past year and is expected to accelerate the company’s record hybrid sales pace, including its highest monthly hybrid sales month ever in November. Ford is seeing demand for fuel economy across its lineup as the brand ranks No. 1 in fuel economy customer satisfaction by J.D. Power and now beats Toyota for leading efficiency in every segment where both compete.

The EPA also certified Fusion Energi to deliver up to 92 MPGe highway and a combined 100 MPGe – figures that could potentially help save customers an estimated $6,850 in fuel costs compared with an average new car over the course of five years.

Adding to Fusion Energi’s value – and the myriad ways it beats Toyota Prius plug-in – are its innovative technologies that are designed to help win over both novice and pro hybrid owners. 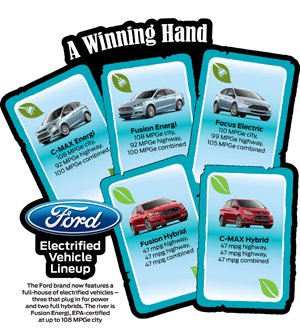 SYNC® with MyFord Touch® offers multiple ways – including voice commands – for customers to manage and control their phone, available navigation, entertainment and climate functions. Plug-in hybrids and all-electric models have additional options for monitoring information like battery state of charge.

EV+ combines the built-in GPS of Ford SYNC with proprietary software algorithms developed by Ford engineers to learn frequent destinations. As a result, vehicles give drivers more drive time in electric-only mode. Such technologies have helped get sales for Ford’s electrified vehicle lineup up and running. With more than 19,000 hybrid vehicle sales projected, the automaker expects total fourth-quarter hybrid sales to set an all-time record for a three-month period, with more than half of hybrid sales this year expected to come in the fourth quarter.

In fact, C-MAX became the fastest-selling hybrid ever at launch after 8,030 units were sold in October and November, the first two months C-MAX was on the market. The pace beat Toyota Camry Hybrid’s 7,300 sales in its first two full months of availability in May and June 2006.

“The response to C-MAX really shows the amount of pent-up demand from a specific market for C-segment hybrids,” says C.J. O’Donnell, marketing manager, Ford Electrified Vehicles. “Fusion Energi has a different audience in the midsize sedan market, but delivers many of the characteristics and technologies that make C-MAX Energi so great, which is why we’re anticipating a similar positive response.”

C-MAX is geared toward those most concerned with fuel economy, but designed so that owners aren’t forced to sacrifice comfort and convenience.

Fusion is designed with the driver’s sense of style in mind, delivering a midsize sedan that offers functional design elements that enhance its sleek exterior and promote fuel economy. A video explaining the origin of Fusion Energi can be found here.

With Fusion Energi and Fusion Hybrid, the all-new Fusion lineup brings the widest range of powertrain options to the U.S. midsize segment. Fusion also is available in gas-powered versions with a choice between a pair of fuel-efficient EcoBoost® engines and a normally aspirated four-cylinder engine.

The addition of Fusion Energi gives customers yet another Ford option when shopping for an electrified vehicle – already available are Focus Electric, Fusion Hybrid, C-MAX Hybrid and C-MAX Energi.

Focus Electric went on sale in late 2011, followed by C-MAX Hybrid and C-MAX Energi – the two vehicles that make up Ford’s first hybrid-only line in North America – this past autumn.

Fusing technologies Many of the innovative technologies of Fusion Energi are shared across Ford’s electrified vehicle lineup and draw from the automaker’s portfolio of about 500 patents related specifically to hybrid technology: