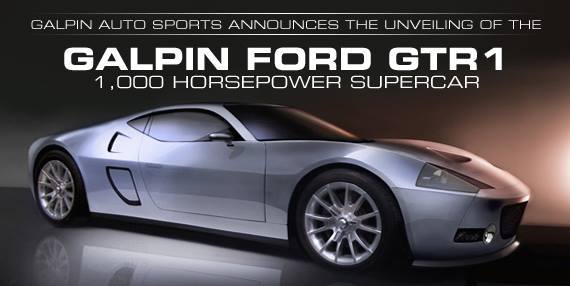 GAS Announces the Unveiling of the FORD GTR1

Galpin Auto Sports today announced its first coach built supercar, the Galpin Ford GTR1, will debut on the Monterey peninsula during a week of automotive festivities highlighted by an unveiling at The Quail: A Motorsports Gathering (August 15) and display on the esteemed concept lawn of the Pebble Beach Concours d’Elegance (August 18).

Continuing Galpin’s 60-year legacy of customizing vehicles, the GTR1 is based on the Ford GT as an interpretation of what the GT may have looked and performed like had it continued its evolution. The GTR1 boasts a power plant capable of an estimated 1024 horsepower and 739 pound feet of torque, generated from a twin turbocharged 5.4L V8 engine that is mechanically capable of speeds in excess of 225 mph – making it a truly modern and bold American mid-engine supercar.

The interior features a machined aluminum instrument cluster, a McIntosh sound system, and luxurious hand fabricated leather trimmed seats, dash, door panels and headliner. The Galpin Ford GTR1 will be extremely limited in production, with a choice of aluminum or carbon fiber bodies. “We’re incredibly excited and honored to celebrate the culmination of Galpin’s 60 years of creating unique vehicles with the debut of our first supercar at such respected venues,” said Beau Boeckmann, Vice President of Galpin Motors and President of Galpin Auto Sports.