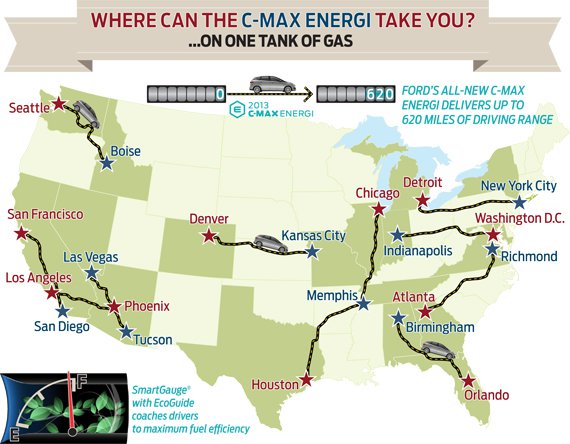 DEARBORN, Mich., Oct. 16, 2012 – America’s most efficient utility vehicle – Ford’s new 108-MPGe C-MAX Energi plug-in hybrid – also has the most range of any utility or compact vehicle with a 620-mile overall driving range as rated by the Environmental Protection Agency.

This means C-MAX Energi customers could drive from Detroit to New York City, San Francisco to Las Vegas, or even Portland, Ore., to Twin Falls, Idaho, through the combined use of the power stored in the vehicle’s advanced lithium-ion battery and one tank of gasoline.

The Toyota Prius plug-in trails the C-MAX Energi by 80 miles at 540 miles of overall range, and the Chevrolet Volt comes in third at 380 miles.

“C-MAX Energi is America’s most efficient utility vehicle, a great symbol of how Ford gives customers the power to choose leading fuel-efficiency across our lineup with gas prices spiraling upwards of $5 a gallon in some parts of the country,” says John Davis, C-MAX chief engineer. “The C-MAX Energi’s leading range also means customers can spend more time on the road and more money on their priorities instead of at the gas pump.”

C-MAX Energi achieves up to 21 miles in all-electric mode, meaning at least one leg of the average work commute – reportedly 20 miles each way – could be completed each day on electric battery charge only, allowing customers to save gas as they face traffic congestion in their commute.

A study by the United States Department of the Treasury estimates congestion consumed an extra 1.9 billion gallons of fuel in 2011, approximately 5 percent of all gasoline used.

“The C-MAX Energi is the first plug-in hybrid to combine significant electric only range with great overall range on a tank of gas,” says Davis. “We expect many C-MAX Energi customers will commute largely on electricity, yet will still have the range, space and flexibility to take a long road trip without stopping every few hours.”

Debuting this fall with a 108 MPGe city EPA rating and for $29,995 after a federal tax credit, the C-MAX Energi is Ford’s first production plug-in hybrid vehicle and part of the company’s first dedicated line of hybrids.

Drivers can handle the roads with power and style as well. Offering 195 horsepower with a fully charged battery, the new C-MAX Energi has 60 more horsepower than the Prius plug-in hybrid and boasts class-exclusive technologies such as hands-free liftgate and active park assist.

With the growing trend of commuters spending more time on the roads, the C-MAX Energi’s combination of fuel efficient highway driving and electric-powered city driving is more important than ever. A recent study from New York University’s Rudin School of Transportation shows today’s commuters are on the road longer than ever before, and the number of people who commute more than 90 miles to work has doubled over the past 10 years. With a 108 MPGe city rating and 92 MPGe on the highway, C-MAX Energi gives customers leading fuel efficiency throughout their commute.