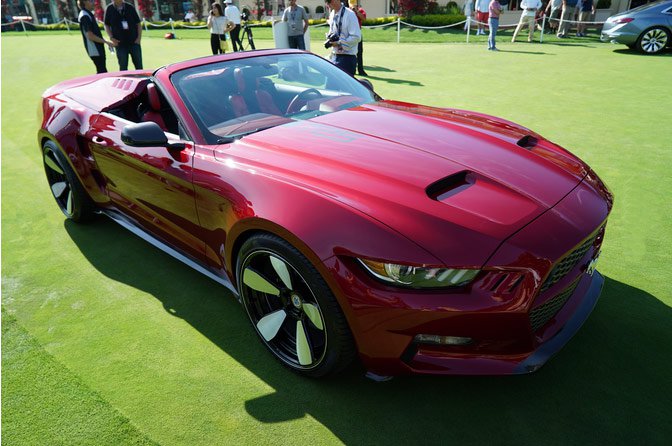 The companies are calling it the latest iteration of the “Ultimate American Muscle Car,” and it builds on the Galpin Fisker Rocket that originally debuted in concept form at the 2014 Los Angeles Auto Show. Based on the Ford Mustang, the new Rocket Speedster is a convertible carbon fiber-bodied sports car intended for low-volume production. Using a carbon fiber speedster cover, the team transformed the four-seat convertible into a two-seat speedster with a carbon fiber hood feeding air into a supercharged V8 engine pumping out 725 hp.

The concept was built by GFMI Metalcrafters, Inc. in California and has a number of key aerodynamic features to channel airflow for necessary cooling and downforce. Additions include a pair of air scoops mounted on the rear fenders ahead of the wheels, helping direct fresh air to the large 15-inch Brembo Gran Turismo brakes. The Rocket Speedster concept rides on 21-inch metallic red five-spoke wheels, matching the exterior of the car.

In a press release, Galpin and Fisker confirmed that the Rocket Speedster won’t be a one-off concept and interested buyers will have the option to buy a car through Galpin Ford directly or through numerous hand-picked dealers around the world.

“Henrik’s original design sketches for the Rocket gave me chills and the convertible is no different,” said Beau Boeckmann, President of Galpin Motors. “This Speedster Concept has added another layer of style to the car without losing an ounce of the incredible beauty of the coupe. It really has been a dream collaboration, combining Henrik’s design execution with the performance and customization expertise of the Galpin Auto Sports team.”