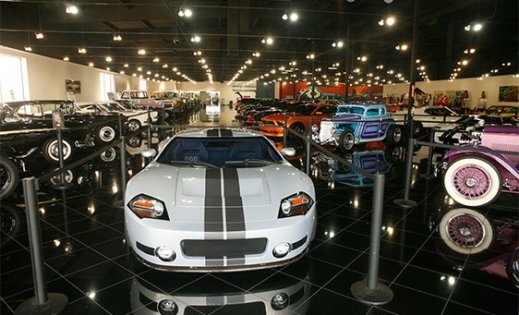 Galpin Ford, located in a suburb of Los Angeles – North Hills, California, to be exact – has been the number one volume Ford dealer in the world for a whopping 24 years in a row. Bert Boeckmann was hired in 1953 as a salesman by Frank Galpin, and ended up buying the dealership from Frank when he retired in 1968. Bert is still the head guy at Galpin, but his son Beau, who is now Vice President, is the one getting most of the press. Most of that has to do with Galpin Auto Sports (G.A.S.), where new car shoppers can walk across the street and see all the various ways that they can customize their cars and trucks. As Beau says, “Dealership customers often come to G.A.S. to have their new vehicles customized. As an added perk, they are able to work the added expense into their dealership financing. It’s helped us, and it’s helped the dealership business because we’re bringing in customers too. Some people come to Galpin Auto Sports and say, ‘Oh, I’ve been thinking about getting a new car.’ It’s good all around.”

Next door to G.A.S. is the Galpin Premier Collection of cars that represent Ford history, G.A.S.-customized (referred to as “Galpinized”) cars, and Beau’s unique sense of personal automotive taste. At his heart, Beau is a Ford guy, so the majority of the 50 or so cars you’ll see in the museum are from the Blue Oval, but he also has a keen interest in custom cars, particularly the radical custom cars of ‘60s icon Ed “Big Daddy” Roth. “Roth cars” as they are known, were created out of Roth’s fertile and sometimes odd vision. They not only toured the world in car shows and were publicized in magazines, but most were reproduced as 1/25-scale models. The G.A.S. collection houses one of the largest collection of Roth cars in the world, including the hovercraft-like Rotar, Orbitron (which was found a few years ago in Juarez, Mexico, and being used as a trash dumpster), Tweedy Pie, Mysterion, Great Speckled Bird, Globe Hopper and Secret Weapon.

There is also a collection of legendary hot rodding personality and pinstriper Von Dutch’s cars and tools, more custom show cars from George Barris and Dan Woods, some tiny microcars, a handful of cars that represent typical “Galpinizing” styles, and some Galpin-built show cars.

Beau’s first car, a mid-‘60s Mercedes, is in the collection, as is a recreation of Bert’s first car, a Ford Model A, built by Galpin’s in-house builder and historian Dave Shuten. From the racing world, there are a couple of Broncos, a recreation of Ron Hornaday’s Galpin-sponsored stock car from the early ‘60s, Gary Weckesser’s wild 4-engine Mustang drag car and the land speed record-holding Edelbrock Special 1929 Ford on 1932 rails built by Bill Likes in the 1940s. Some of the more “unique” cars are the Barris-customized T-bird of television personality Elvira and Liberace’s personal Zimmer.

The G.A.S. collection acts as a wonderful selling tool and shows the dealership’s dedication to cars, custom cars, hot rods, and automotive history, but it’s more than just a museum – it’s a showroom. Shuten said, “We buy and sell out of here. Most of the cars are for sale and the inventory changes quite often.” Because of that, you can visit the place multiple times and see different cars each time.

Click here to view the full article on Ford Social, by Rob K.

Galpin’s Pumpkin Patch Is Back!